Model sensitivity studies of the decrease in atmospheric carbon tetrachloride 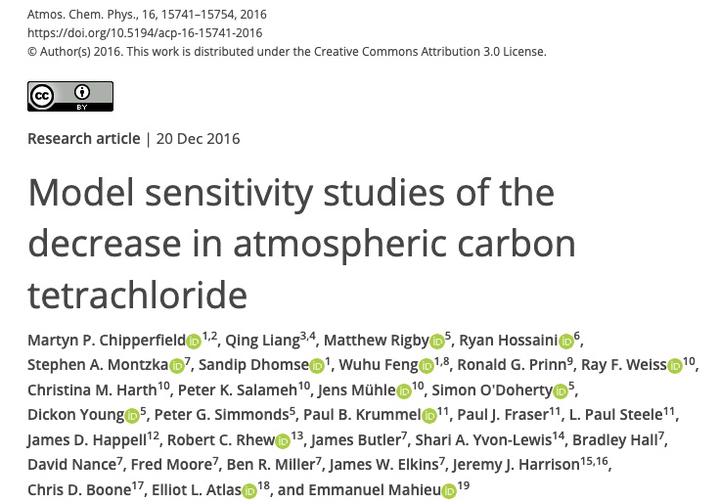 Carbon tetrachloride (CCl4) is an ozone-depleting substance, which is controlled by the Montreal Protocol and for which the atmospheric abundance is decreasing. However, the current observed rate of this decrease is known to be slower than expected based on reported CCl4 emissions and its estimated overall atmospheric lifetime. Here we use a three-dimensional (3-D) chemical transport model to investigate the impact on its predicted decay of uncertainties in the rates at which CCl4 is removed from the atmosphere by photolysis, by ocean uptake and by degradation in soils. The largest sink is atmospheric photolysis (74 % of total), but a reported 10 % uncertainty in its combined photolysis cross section and quantum yield has only a modest impact on the modelled rate of CCl4 decay. This is partly due to the limiting effect of the rate of transport of CCl4 from the main tropospheric reservoir to the stratosphere, where photolytic loss occurs. The model suggests large interannual variability in the magnitude of this stratospheric photolysis sink caused by variations in transport. The impact of uncertainty in the minor soil sink (9 % of total) is also relatively small. In contrast, the model shows that uncertainty in ocean loss (17 % of total) has the largest impact on modelled CCl4 decay due to its sizeable contribution to CCl4 loss and large lifetime uncertainty range (147 to 241 years). With an assumed CCl4 emission rate of 39 Gg year−1, the reference simulation with the best estimate of loss processes still underestimates the observed CCl4 (overestimates the decay) over the past 2 decades but to a smaller extent than previous studies. Changes to the rate of CCl4 loss processes, in line with known uncertainties, could bring the model into agreement with in situ surface and remote-sensing measurements, as could an increase in emissions to around 47 Gg year−1. Further progress in constraining the CCl4 budget is partly limited by systematic biases between observational datasets. For example, surface observations from the National Oceanic and Atmospheric Administration (NOAA) network are larger than from the Advanced Global Atmospheric Gases Experiment (AGAGE) network but have shown a steeper decreasing trend over the past 2 decades. These differences imply a difference in emissions which is significant relative to uncertainties in the magnitudes of the CCl4 sinks.