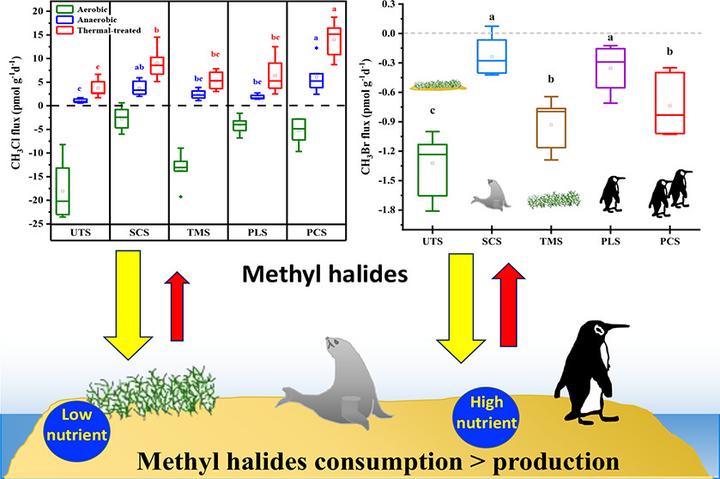 Methyl chloride (CH3Cl) and methyl bromide (CH3Br) are the predominant carriers of natural chlorine and bromine from the troposphere to the stratosphere, which can catalyze the destruction of stratospheric ozone. Here, penguin colony soils (PCS) and the adjacent tundra soils (i.e., penguin-lacking colony soils, PLS), seal colony soils (SCS), tundra marsh soils (TMS), and normal upland tundra soils (UTS) in coastal Antarctica were collected and incubated for the first time to confirm that these soils were CH3Cl and CH3Br sources or sinks. Overall, tundra soil acted as a net sink for CH3Cl and CH3Br with potential flux ranges from −18.1 to −2.8 pmol g–1 d–1 and −1.32 to −0.24 pmol g–1 d–1, respectively. The deposition of penguin guano or seal excrement into tundra soils facilitated the simultaneous production of CH3Cl and CH3Br and resulted in a smaller sink in PCS, SCS, and PLS. Laboratory-based thermal treatments and anaerobic incubation experiments suggested that the consumption of CH3Cl and CH3Br was predominantly mediated by microbes while the production was abiotic and O2 independent. Temperature gradient incubations revealed that increasing soil temperature promoted the consumption of CH3Cl and CH3Br in UTS, suggesting that the regional sink may increase with Antarctic warming, depending on changes in soil moisture and abiotic production rates.