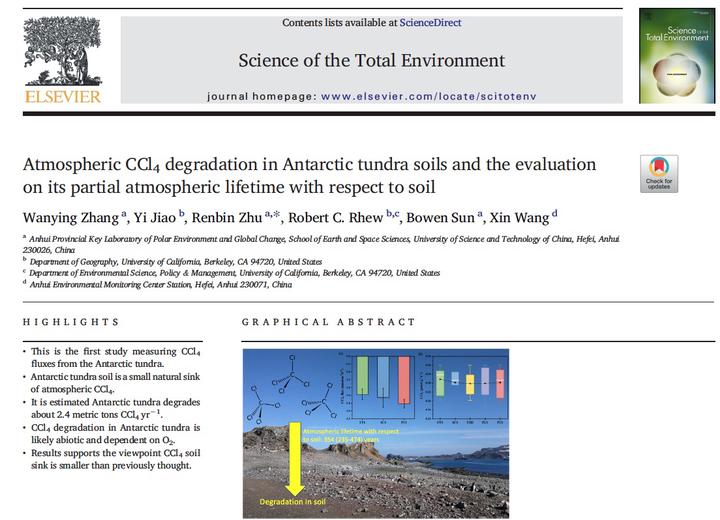 Carbon tetrachloride (CCl4) is an anthropogenic gas with a long atmospheric lifetime and can catalyze the destruction of stratospheric ozone. Natural soils are believed to be important and widespread sinks of atmospheric CCl4, although poorly characterized due to a limited number of measurements. In this study, for the first time in situ static-chamber measurements and laboratory-based incubations for CCl4 fluxes were conducted at coastal Antarctic tundra. Results showed that soil in remote Antarctica is also acting as a CCl4 sink, with an average uptake rate of −2.2 ± 0.6 nmol m−2 d−1, which is comparable to the reported soil sinks in other regions of the world. No significant difference (p > 0.05) was found across different types of tundra, such normal upland tundra, coastal marsh tundra, and tundra in the sea animal colonies. Soil CCl4 fluxes did not show significant correlations (p > 0.05) with soil moisture, pH, TOC, TN, TP and Cl contents. Laboratory-based anoxic incubations showed that the uptake rates of CCl4 in tundra soil were suppressed; post-thermal sterilization incubations showed that soil CCl4 sink was enhanced; these results suggested that CCl4 degradation in tundra soil was likely an abiotic process preferring oxic environments. A rough extrapolation suggested that Antarctic tundra may degrade about 2.4 metric tons of atmospheric CCl4 each year. Combining soil CCl4 fluxes from this study and other literature reports, CCl4 partial lifetime with respect to the soil sink was evaluated to be 354 (235–474) years, which supported the recent viewpoint that the soil sink of CCl4 is smaller than previously thought.

Type
Journal article
Publication
Science of the Total Environment, 835, https://doi.org/10.1016/j.scitotenv.2022.155449
This study was supported by National Natural Science Foundation of China, National Key Research and Development Program of China and Strategic Priority Research Program of Chinese Academy of Sciences. Note: No funds from China were received by UC Berkeley or our laboratory for this work.
Source Themes